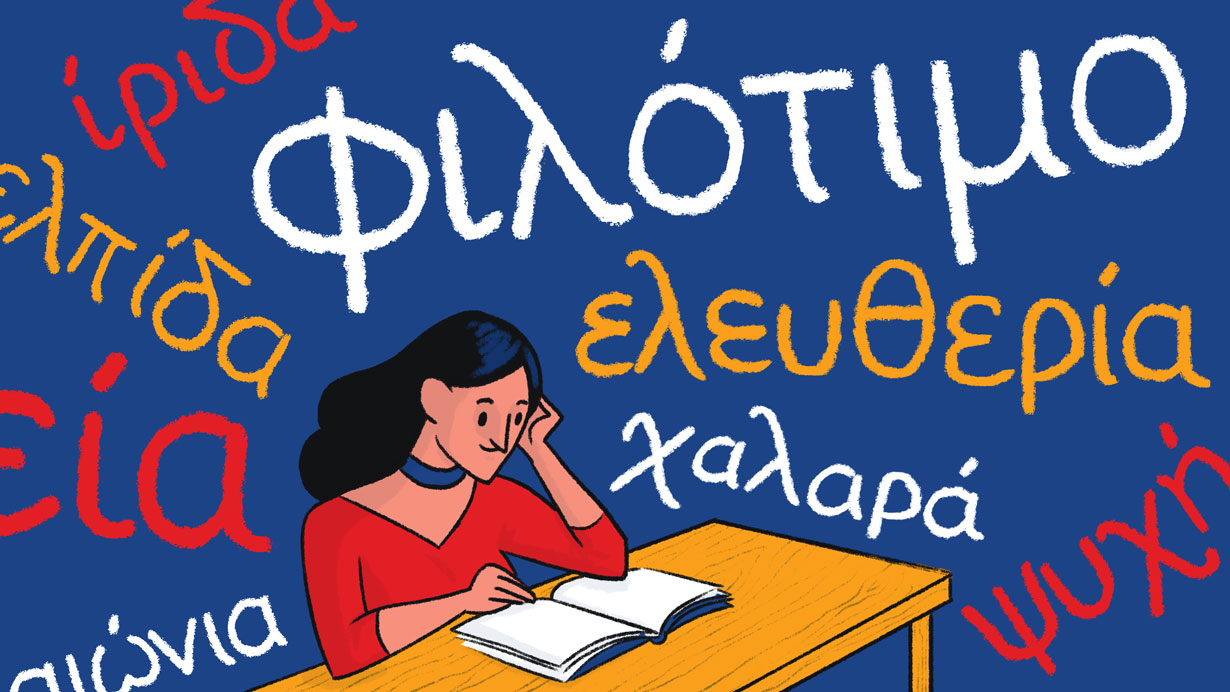 With a history stretching back more than 3,500 years, the Greek language unsurprisingly offers an array of beautiful words, rich in meaning, with which to acquaint yourself. In the English-speaking world, it’s impossible to go a day without coming across at least one word of Greek origin. From the marmalade adorning our morning toasts, to the music we play and the dramas we watch at the cinema, the Ancient Greeks have thoroughly infiltrated the modern English we speak today. There are over 150,000 examples to point at. There are many varieties such as ancient Greek words for love and ancient Greek words for power.

Here are some of these Ancient Greek Words In English.

To give kudos is to offer fame, glory or high recognition of achievement. Note that in American English usage, kudos can take on plural form; for example, “ He deserves many kudos for such work.”

Contrary to popular belief, phobia isn’t just fear, it’s an irrational and exaggerated fear of something. Phobia can be associated with people, animals or situations.

A plethora refers to an over abundance or excess; a superabundance. For example, you might say, “We have a plethora of food for this party.”

Genesis means birth, origin or the coming into being of something, which is why the first book of the Bible is called Genesis.

Dogma refers to a principle or set of principles laid down by an authority as incontrovertibly true. Dogma is usually associated with religion, where the principles and beliefs are undisputable and authoritative. Pluralized, dogma becomes ‘dogmas’ or dogmata.

In Greek, ethos means “accustomed place.” It is used in the English language to refer to the disposition or characteristics of a specific ideology or person.

Anemia is a condition in which the body does not have enough healthy red blood cells, or less than the normal quantity of hemoglobin in the blood. There are over 400 types of Anemia.

Acme refers to the highest point of an achievement or development. It represents perfection of the thing expressed, for example, “He has reached the acme of his career.”

Agora comes from the word for an open market place found in many of the cities of ancient Greece. In the modern day we use this word to describe any type of open assembly or congregation.

Founded by famous Greek mathematician, Archimedes, eureka represents a celebrated discovery. When Archimedes discovered that the water displaced by submerging a part of his body in the bath, was equal to the volume of the submerged body part,  he ran into the street shouting eureka! Eureka!

This means to show love to strangers. Hospitality was considered to be one of the most virtuous qualities in ancient Greek culture, and philoxenia is the word to describe the value and respect extended towards a guest or visitor in your home or a stranger on the street. The term dates back to ancient Greece, where guests of the Spartan king abused the philoxenia shown to them by abducting the king’s wife, triggering the Trojan War.

This means a burning desire. There’s no English word that captures the extent of passion and desire that kapsoura evokes. In Greek, the word denotes the kind of love that burns so ardently that it threatens to consume itself.

This means honour. There is no succinct definition for the Greek word philotimo. It is a powerful word used to describe individuals full of integrity and honour, encompassing the pride one takes in living a rich, considerate and meaningful life.

Used to describe The smell of wet earth. So untranslatable is this word that the English language has simply borrowed the term directly from Greek. Petrichor is a poetic way of describing the smell of the earth after it has rained. The word is made up of the Greek petra, meaning ‘stone’, and īchōr, the blood of the gods in Greek mythology.

This means to do something with complete passion and love and is usually associated with a task or creative endeavour. The closest English saying is ‘labour of love’, but this has a more negative connotation. The word meraki is positive and all-consuming, with its roots found in merak, a Turkish term meaning to do something with pleasure.

Meaning uncontrollable joy, this word describes overwhelming happiness or euphoria, or a good mood or disposition.

This defines a young man of note. Taken from the ancient Greek pallax, which meant young man or young lad, the modern Greek word palikari is used to describe a young man who is in his prime or has achieved something great beyond his years.

Meaning healthy in both mind and body, this is nother ancient Greek word that is still in use today. Sophrosyne describes an individual who has a masterful control of both their mind and body, along with excellence of character, and is at peace with themselves.

Meaning the right moment to act. Closely related to the Greek word for time, chronos, kairos is less a measure of the hours and years than the acknowledgement of one special moment in time. It is the idea of the ripe, perfect moment for action.

This word evokes a stage of friendship that sees companions, who simply enjoy each other’s company, get together to share their values, ideas and philosophies.

As used in English, comes from the ancient Greek pará, which means ‘beside’, ‘alongside’ and kósmos, meaning ‘world’, ‘universe’. This word denotes a detailed imaginary world.

From the word akri (“tip” or “edge”) and the verb vaino (“to walk”), an acrobat is someone who walks on the edge, often on tiptoe.

A lot of Greek words used in English like to disguise themselves as Old French or Latin. Don’t let looks deceive you, though: This example actually comes from the Greek word koimame which means“to sleep”, which is also the root of another word, koimitirion — “dormitory”. Is it creepy, then, that we call our final places of rest dormitories for the dead? Perhaps.

Cynicism comes from the Cynics, a school of Ancient Greek philosophers. Their namesake is probably derived from a public gymnasium (school) where one of Socrates’s pupils taught called Cynosarges (“white dog” or “swift dog,” depending on who you ask). According to one myth, the Athenians were in the middle of making an offering to Heracles when a dog snatched the animal and deposited it near the location where the school was later built.

How would you describe a dinosaur? If you came up with something similar to “fear-inspiring reptile,” congratulations. The name we use to call these magnificent, ancient creatures comes from the Greek words deinos (“terrible”) and savra (“lizard”).

According to Ancient Greek mythology, Europe was a mythological princess with big, beautiful eyes, a trait reflected in the very origins of her name: evrys (“broad”) and ops (“eye”). When the god Zeus laid his own eyes on her, it was love at first sight. He quickly transformed himself into a white bull and spirited her off to the faraway lands we now call Europe.

Many Greek words used in English have mythological origins. Galaxy, a.k.a. the Milky Way, comes from the Greek word for milk, gala. According to one myth, the Milky Way was created by Zeus’s baby son, Heracles, after he tried suckling on his step-mother’s milk while she slept. When Hera woke up to discover that she was breastfeeding an infant that was not her own, she pushed the child away, causing her milk to spurt into the universe.

Hermaphrodite was the son of Hermes and Aphrodite, who apparently couldn’t be bothered with finding a new name for their child. As the most handsome man in the word, Hermaphrodite became an object of affection for the nymph Salmacis. After wishing for eternal love, the gods answered her prayers by joining the two lovers in one body.

Thousands of long-distance footraces take place every year around the world. Officially, a marathon is 42.1 km (or 26.1 miles) long, in a nod to the actual distance between two Greek cities. Legend has it that in 490 B.C., Pheidippides ran all the way to Athens from a battlefield in Marathon to announce to the world that the Persians had been defeated at the aptly-named Battle of Marathon. After his victorious announcement, he collapsed and died. In 2010, Greece celebrated the battle’s 2,500 year jubilee with — you guessed it — a marathon.

Although dictionaries will tell you that the word comes from Portuguese, it in fact comes from the Greek words meli (“honey”) and milo (“apple”). Some sources say that the Ancient Greeks liked cooking quinces (marmelos in Portuguese) with honey.

This common Greek word used in English has a somewhat bizarre etymology. Coming from the Greek words melas (“black”) and khole (bile), it was once thought that when your spleen produces an excess of black bile, you feel gloomy. This belief is rooted in the Ancient Greek school of medicine called humorism, which hypothesized that body fluids (“humors”) directly influenced a person’s mood.

Music literally means art of the Muses, the nine Greek goddesses who presided over the arts and sciences. The concept of a museum was originally intended to be a shrine for the Muses.

Narcissism comes from the Ancient Greek mythological figure of Narcissus, a young man who fell in love with himself when he saw his reflection in a lake. One nymph who fell passionately in love with him withered away into nothingness when he ignored her, leaving no trace behind but her voice. Her name was Echo.

The word panic comes from the name of the Ancient Greek goat-god Pan, who spread terror among nymphs like Echo..

Planet comes from the Greek verb planomai, which means “to wander.” To the Ancient Greeks, planets were simply wandering stars.

From the Greek word for flesh, sarx, sarcasm describes the (metaphorical) act of stripping someone’s flesh off with a sneering comment.

Combining the words schizein (“to split”) and phren (“mind”), the meaning of this particular Greek word used in English is pretty self-explanatory.

Thespian is a fancy word for actor, especially a theater actor. The name comes from Thespis himself, a 6th century B.C. Ancient Greek poet who was said to be the first person to ever appear on a stage as an actor.

If you’d like to learn more, here are some latin words used in english. Check them out.