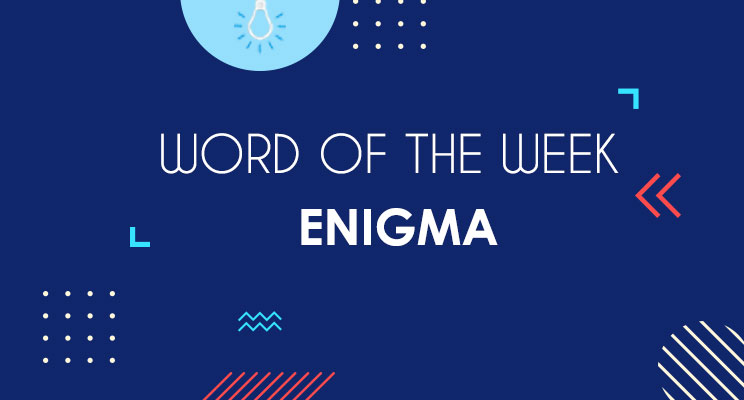 Each week has a word for focus, and this week we’ll be focusing on the word ‘enigma’. You can find other words of the week here

1 : something hard to understand or explain

2 : an inscrutable or mysterious person

3 : an obscure speech or writing

Some common synonyms of enigma are mystery, problem, puzzle, and riddle. While all these words mean “something which baffles or perplexes,” enigma applies to utterance or behavior that is very difficult to interpret.

Example: his suicide remains an enigma

The words mystery and enigma can be used in similar contexts, but mystery applies to what cannot be fully understood by reason or less strictly to whatever resists or defies explanation.

Example: the mystery of the stone monoliths

In some situations, the words problem and enigma are roughly equivalent. However, problem applies to a question or difficulty calling for a solution or causing concern.

The words puzzle and enigma are synonyms, but do differ in nuance. Specifically, puzzle applies to an enigma or problem that challenges ingenuity for its solution.

Example: the thief’s motives were a puzzle for the police

The meanings of riddle and enigma largely overlap; however, riddle suggests an enigma or problem involving paradox or apparent contradiction.

Example: the riddle of the reclusive pop star

First Known Use of ‘enigma’

The first known use of enigma was in 1539

History and Etymology for Enigma

Latin aenigma, from Greek ainigmat-, ainigma, from ainissesthai to speak in riddles, from ainos fable