WORD OF THE WEEK – SANGUINE 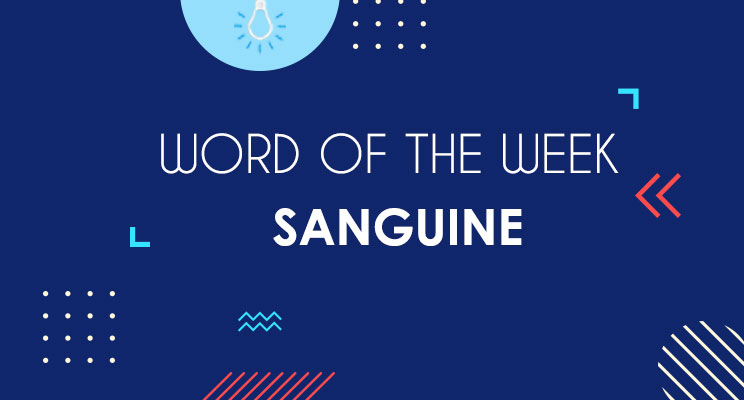 WORD OF THE WEEK – SANGUINE

Each week has a word for focus, and this week we’ll be focusing on the word ‘sanguine’. You can find other words of the week here.

Definition of sanguine (Entry 1 of 2)

3a : consisting of or relating to blood

c : accompanied by, involving, or relating to bloodshed : BLOODY

d of the complexion : RUDDY

4 : having blood as the predominating bodily humor

also : having the bodily conformation and temperament held characteristic of such predominance and marked by sturdiness, healthy red complexion, and cheerfulness

Definition: a moderate to strong red

Sanguine has quite a few relatives in English. Sangfroid (“self-possession especially under strain”) and sanguineous (“bloodthirsty”) are consanguineous with sanguine. (Consanguineous, means “descended from the same ancestor.”) The tie that binds these words is sanguis, the Latin word for blood. Exsanguination (“the draining or losing of blood”), sanguinary (“murderous” or “bloody”), and the rare sangsue (“leech”) and sanguinolent (“tinged with blood”) are also sanguis relatives. That’s something you can raise a glass of sangaree or sangria (“a usually iced punch made of red wine, fruit juice, and soda water”) to.

First Known Use of sanguine

As an Adjective; 14th century.

History and Etymology for sanguine